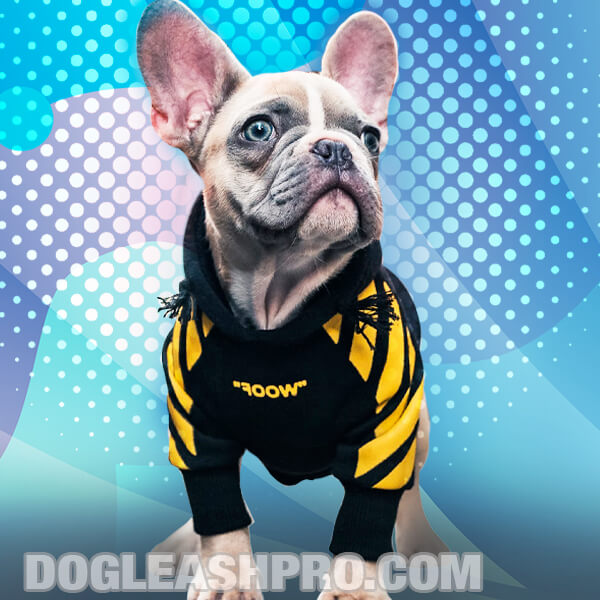 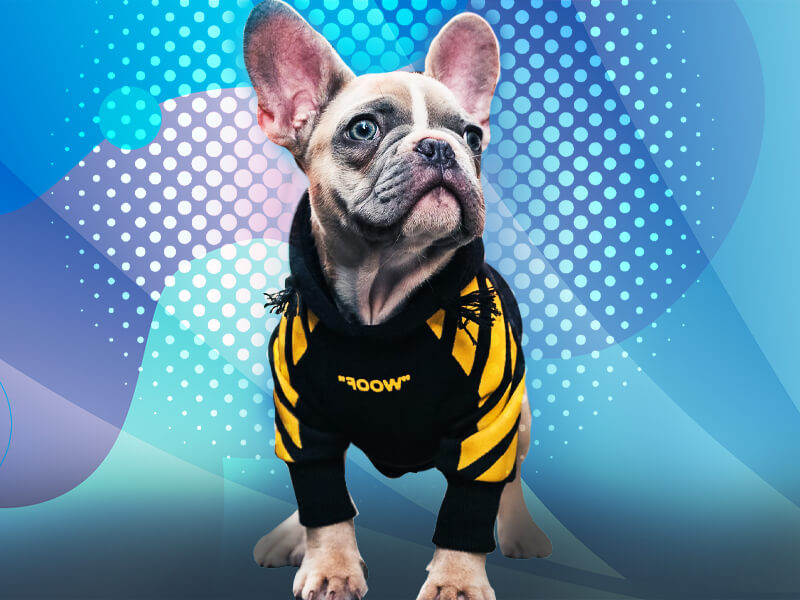 My friend heard about the Sable Frenchie and decided to buy one from a local breeder last weekend. However, she came home with a fawn Frenchie. Since she couldn’t tell the difference between the two, she took the breeder’s word. She kept the fawn Frenchie and is in love with her little pooch, but wish she had done a bit more research.

In this article, we’ll discuss everything you need to know about the Sable French Bulldog, including its DNA, how to tell the difference between a fawn and a Sable Frenchie, how much they cost, and more! Let’s begin.

What is a Sable French Bulldog?

Sable Frenchies have sporadic black hair or black tips spread throughout their heads and bodies. Unlike spots or patches, the black hair on these Frenchies is distributed evenly and mixed with fawn fur, giving them a unique look.

Sable Frenchies have similar color genetics to fawn and tricolor. All these colors are expressed on the “A” locus. Locus refers to the location on the DNA.

The A locus can have four alleles, and each allele results in particular coat colors. These alleles are a, at, aw, and ay.

Of these, the ay gives the French bulldog Sable color.

Besides the coat and coat color, a Sable Frenchie is in every way similar to a regular Frenchie. They have petite, athletic bodies, flat muzzle, traditional bulldog jowls, and signature bat-like ears.

The most distinguishing feature of a Sable-colored French Bulldog is his striking coat. Sable Frenchies have a fawn or reddish fawn base coat littered with black hair. These black hairs are denser at the dorsal area (top of the back, neck, and head).

We said that the Sable color French Bulldog has a fawn coat, so what’s the difference between Sable and fawn? Some say fawn French Bulldogs have a black mask, but we also have the black mask Sable French bulldog.

Let us help you distinguish between Sable and fawn next.

If someone shows you a Sable Frenchie, you’ll notice it is very similar to a fawn Frenchie. So, what is the difference between fawn and Sable?

Let’s show you using a table.

The only significant difference between blue fawn and blue Sable French bulldog is the presence of dark-tipped hair.

Here’s a table to help you tell them apart.

Let’s read a bit more about the blue Sable Frenchie.

Blue Sable merle Frenchies have the Sable and merle gene combined to give them a breathtaking coat.

Merle isn’t a natural color for Frenchies, so blue Sable Merle Frenchies are not purebred. The merle gene can also give Frenchies congenital disorders like blindness and deafness.

Blue pied Sable Frenchies are stunning to look at. Their coat is white with patches of fawn and blue tips throughout their body.

You may be interested in: White French Bulldog – Complete Guide

The blue Sable tri French Bulldog is pretty hard to come by. Their coat has three colors with blue sabling, meaning they need to express the tri-color, dilution, and sabling genes simultaneously.

The blue Sable tan French Bulldog is a darling mix of blue, Sable, and tan. The presence of all three genes gives this Frenchie a fascinating look.

Lilac or Isabella is a rare coat color that results from dilution of the chocolate color. These Frenchies can also have black-tipped hair, making them lilac Sable French Bulldogs.

Fawn comes in various hues, one of which is reddish fawn. A red Sable Frenchie has the same coat color as a regular fawn, but you’ll notice it’s more of an apricot color instead of yellow.

Chocolate Frenchies can have any color coat, but their nose, eye rims, paw pads, and lips are brown instead of black.

A Sable tri Frenchie has three colors on his coat in addition to the black-tipped hair.

Sable merle Frenchies have a Sable coat and carry the merle gene. This gene gives them blue eyes and splotches of faded color on their coat.

The coat of a Sable pied Frenchie is primarily white with random patches of Sable fawn.

The Sable tan French bulldog coat is mostly fawn with tan patches throughout the body.

Sometimes the black-tipped hairs are so numerous that the Frenchie looks almost black. Such Frenchies are known as black Sables.

The ratio between black-tipped hair and regular fawn hair determines the overall look of the Sable Frenchies. The more black tips the Frenchie has, the darker he will be.

All Frenchies belong to the small or toy size category. A blue Sable French bulldog full-grown can be as tall as 13 inches and weigh 28 pounds.

The Sable male French Bulldog grows just as big as a female.

Here’s a size chart for both male and female Sable French Bulldogs.

Sable Frenchies make adorable pets for any household. They can adjust to all kinds of living spaces and love making friends. They’re calm, confident, and not known to be aggressive.

But this doesn’t mean they will warm up to you right away. Sable Frenchies take time getting to know people.

Sable Frenchies are tiny and harmless to young children. They’re also pretty careful not to get hurt by kids. These qualities make them perfect small canines for a family with kids.

Sable French Bulldogs can learn to love training sessions if you keep them short and exciting. Your pup won’t remember what you’re teaching them if he sees training as a chore.

Sable Frenchies also have a short attention span, meaning you need to wrap up the class before things get boring.

Sable Frenchies run out of breath pretty quickly, which means they don’t make good jogging partners. A daily light walk will ensure your Sable Frenchie stays healthy without getting too exerted.

Sable Frenchies are quite easy to groom as you have only a small area to work on. They also have short, smooth fur that doesn’t tangle, and a thorough weekly brushing session should be enough.

Frenchies can go without bathing for long periods, but that doesn’t mean they don’t require regular cleaning. Use a damp towel or doggy wipes to clean these little pups every week.

With my two furry pups, I regularly use either the Arm & Hammer doggy grooming wipes or the Nature’s Miracle doggy bath wipes. These wipes keep my fur buddies clean and fresh after a long day of play or after a long walk. 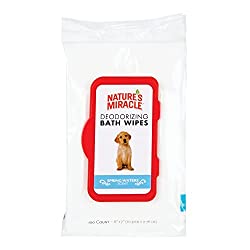 The Nature’s Miracle Spring Waters Deodorizing Dog Bath Wipes contains advanced deep-cleansing and alcohol-free formula to quickly and safely remove tough odors, dander, and dirt. Great for every day use, this gentle bath wipes is great at cleaning coats after playing outside or a long walk.

Buy On Amazon
If you click this link and make a purchase, we earn a commission at no additional cost to you.
Heavy-Duty Multipurpose Dog Bath Wipes 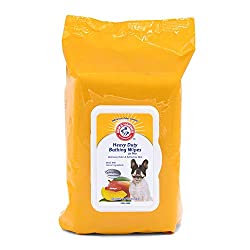 This heavy-duty yet gentle multipurpose doggy wipes is great for dogs of all size and age. Made with all natural ingredients, these high quality wipes removes dirt and odor after a long walk and is a great solution for in-between baths.

When it’s time for their baths, be sure to use dog-friendly shampoo to keep their skin healthy and moisturized.

RELATED: Dog Grooming For Beginners At Home – Dos and Don’ts

No, Sable Frenchies are not hypoallergenic. Their saliva, fur-shedding, and dander can cause allergic reactions in those sensitive to dogs.

A Sable Frenchie owner should be careful about what their pooch eats. Although Sable Frenchies are down to eat anything, you should monitor what they’re putting in their bellies.

Bulldogs are not the healthiest breed, and the Sable Frenchie is unfortunate in the health department too.

Brachycephalic airway syndrome or BAS is the shortening and disfigurement of the nose and throat. This gives your dog a difficult time breathing, causing respiratory distress in some cases.

Tracheal collapse in French Bulldogs happens when the airway collapses during inhalation. Symptoms include breathing problems, fatigue, cough, and stress.

Patellar luxation causes the knee to pop out of place. It’s not life-threatening but is still a hindrance to mobility.

The Sable French Bulldog is an active and hearty breed, but their breathing issues keep them from living a long lifespan. These pups live for up to 10 to 12 years on average.

Sable French Bulldog breeders are available throughout the country, but you have to do some digging before choosing them for your purchase.

Ask for complete medical records for the pup. Avoid buying from breeders who house their puppies in noisy, unhygienic, and overcrowded areas. You should also avoid puppy mills and pet shops.

Such puppies have light-colored fur under their black-tipped ones. In blue Sable French bulldog puppies, the dark-tipped hair is blue instead of black.

You can check out Blue Haven French Bulldogs. They have:

Is the Sable French Bulldog right for me?

The Sable Frenchie is an affectionate creature. Their love for their family can’t be doubted, but these pups are not light on the wallet.

They also have medical needs that a responsible dog owner should know about. If you can provide the care and finances they need, you can’t go wrong with this breed.

What’s the most expensive French bulldog?

Merle, Isabella or Lilac, and Blue are three extremely rare colors for Frenchies. Hence, these pups are the most expensive of them all. 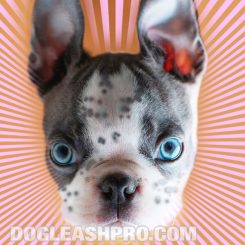 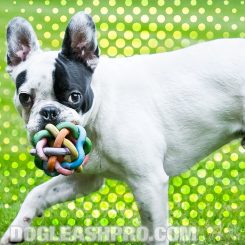 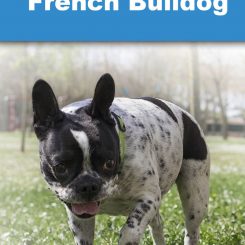