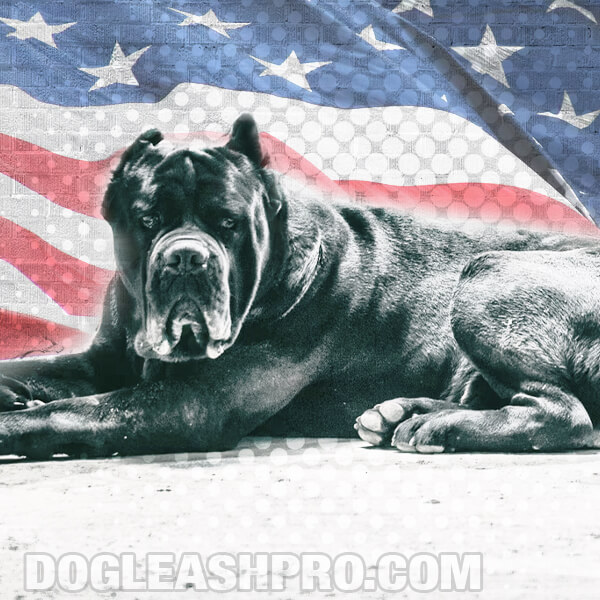 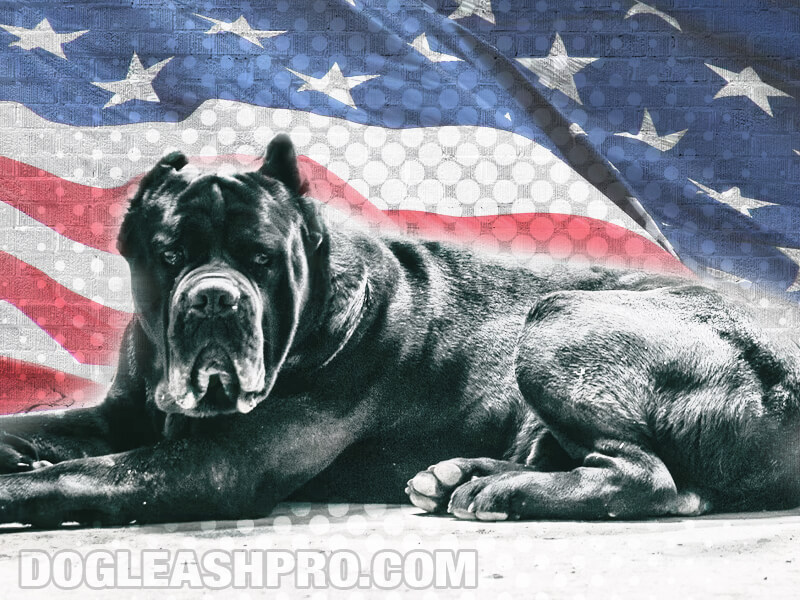 We’ll discuss everything you need to know about the American Mastiff – from temperament, grooming requirements, health issues, training needs, and more. By the end of this guide, you’ll know whether this dog is right for you.

What is a North American Mastiff?

The North American Mastiff is a giant beast with an equally big heart. This incredible and imposing pooch was designed to be a healthier version of the original Mastiff, the English Mastiff.

The American Mastiff dog breed is fairly new, but you’ll still find many breeders offering these pups for sale. That’s because their superior health, low drooling, and impressive physiques have made them very popular among pet owners in a short time.

Combine that with their calm temperament and excellent guarding ability, and you have a canine that’ll protect you and your property with his life. So, let us tell you all about this wonderful breed; this is American Mastiff dogs 101.

Mastiffs descend from ancient warrior dogs that struck terror among enemy soldiers. When they weren’t helping armies win wars, they served as guardians and hunters. After World War II, they arrived in the USA, but strict adherence to breed standards led to inbreeding, and their health deteriorated over time.

The North American Mastiff is pretty new on the canine scene. This pooch was developed in the 1980s by Ohio breeder Fredericka Wagner. Wagner bred English Mastiffs with Kangal Shepherds to produce the North American Mastiff — an equally massive canine with better health and improved life quality. After a while, she ended external crossing and began using her own stock to reproduce them.

Is the North American Mastiff recognized by AKC and UKC?

The North American Mastiff is a recent breed and hasn’t yet received AKC or UKC recognition.

Nonetheless, several canine clubs consider them purebred, including the Continental Kennel Club. There have been some hindrances in getting the North American Mastiff AKC recognition, but fans of this breed are optimistic that they’ll be able to get their pup AKC-registered in the coming years.

Although they’re both similarly heavy-boned and giant canines, the American Mastiff varies in several ways from the original English Mastiff. Some prominent differences are:

Weight: Although the North American Mastiff can grow taller, the English Mastiff is more massive. English Mastiffs are among the heaviest canines in the world.

Build: Although both canines are thick, the English Mastiff has a bulkier appearance. Compared to them, the North American Mastiff seems slimmer.

Drooling: English Mastiffs are notorious for their high drooling, but North American Mastiffs drool far less due to their tighter lips.

Breed history: The English Mastiff has been around for centuries, whereas the North American Mastiff is only a few decades old.

The North American Mastiff is a relatively new breed raised to be gentle companions. On the other hand, the Panja American Mastiff had its reputation severely tarnished by its association with criminals and drug dealers. In fact, one of their nicknames is the Drug Dealer Bandog.

The North American Mastiff inherits most of his physical attributes from the English Mastiff; however, keen eyes canine enthusiasts can notice distinctions between them and their English relatives.

These giant canines are somewhat leaner than other Mastiffs, but they tower above most dogs. They have slightly thinner and longer snouts than Mastiffs. Their necks are muscular, their bodies are evenly proportioned, and they have an overall beefy look.

The fawn, apricot, brown, and black American Mastiff colors are common, whereas brindle and merle are harder to come by. Let’s discuss these two colors.

Brindle is a coat pattern rather than a color. It usually has vertical stripes of light color over a dark base coat. You can also say that brindle is an inverted version of tiger stripes.

Merle is a semi-dominant gene that causes a pooch to have random patches of a dark color over a light coat. Since the gene is semi-dominant, the patches are solid at some places and diluted at others. A merle North American Mastiff is likely crossbred as merle isn’t a natural color for them.

Mastiffs are enormous, and the North American Mastiff is among the largest canines in the world. Everything about them is massive and intimidating: from their large heads to huge jaws to towering height.

The North American Mastiff is one of the tallest canines in the world — even taller than the English Mastiff.

However, they are somewhat leaner than their English counterparts. Female North American Mastiffs are slightly smaller than males, but they still tower over most canine breeds.

The Mastiff personality is a stark contrast to how they look. These canines are calm, affectionate, and level-headed despite seeming like ferocious beasts. They aren’t very energetic and prefer lounging around the house. However, they can sense threats quickly and immediately come to their owner’s protection.

The American Mastiff temperament is in many ways similar to English Mastiffs. They’re gentle, protective, tolerant, quiet, and courageous. They don’t bark much, and with their imposing size, they hardly need to. They can act stubborn and be difficult to train, which is why they’re best suited to experienced owners.

Do North American Mastiff get along with other pets?

The North American Mastiff is instinctively protective of their owner’s property, which includes other animals. That’s because their ancestors were used for guarding livestock. These massive canines may not mingle with other pets a lot, but they’re not a threat to them either. Still, their huge bodies mean they can inadvertently hurt smaller animals.

Training is perhaps the most challenging aspect of owning a North American Mastiff. These pups are strong-willed and get bored easily. They are fully aware of their size and can sometimes challenge your authority.

However, they’re also sensitive, and excessive strictness will have negative results. Training them requires a firm hand. You need to be authoritative and patient. Don’t get angry when training your pup.

Make sure your North American Mastiff gets half an hour of light exercise daily.

Grooming your North American Mastiff isn’t challenging; they’re good with just one brushing session per week. However, their large bodies mean you have a lot of areas to cover.

Coat: Bathing your North American Mastiff once every two months is enough.

Nails: Check their nails regularly and keep them clipped short.

Ears: You should also check their ears for unhealthy earwax buildup.

Teeth: Brush their teeth regularly to keep cavities at bay.

Is the North American Mastiff hypoallergenic?

However, regular grooming at home and in-between grooming appointments can take care of that. These pooches drool less than other Mastiffs, which is also a plus.

The North American Mastiff needs high-quality dog food to fulfill the needs of his massive body. Go for a protein-rich diet with lots of vitamins, minerals, and other micronutrients. Avoid fatty foods and snacks as they can trouble your pup’s tummy.

Hip and elbow joint deformation can cause the bones to rub against the bone, leading to wear and tear. Joint dysplasia is a hereditary condition and can end with a complete loss of mobility.

Pulmonic stenosis is when the pup’s heart cannot pump blood adequately to the lungs. Unfortunately, it’s a common congenital issue among Mastiffs.

Bloat is well-known among large dogs. Eating too fast can cause the pooch to swallow excess air. This air combines with stomach gas to inflate your pup’s tummy. It then twists, which cuts off its blood supply.

Hypothyroidism is when the body’s thyroxin levels fall too low. It can lead to hair loss, weakness, weight gain, and indigestion, among other things.

Cancer, especially bone cancer, is the leading cause of death in Mastiffs. It isn’t easy to detect, but family history can give you a good idea. Always check the medical record of the parents when adopting a puppy.

Cataracts cause the dog’s eye to form a cloudy layer over the lens, obstructing his vision. Although it isn’t painful, it can lead to blindness. Cataracts require surgical removal.

Progressive Retinal Atrophy or PRA is another eye problem that can cause deteriorated vision, often leading to complete blindness.

These heavyset canines can suffer from several bone and joint issues, especially later in their lives. Bone deformities may be congenital, or they can be caused by obesity.

Ectropion is when the dog’s eyelid folds outwards. This exposes the sensitive inner skin and causes irritation.

Entropion is similar to ectropion, except the eyelid turns inwards instead of outwards. The folded eyelash rubs against the eyes, damaging the lens.

You may be interested in: Dog Sleeps With Eyes Open – Should You Be Concerned?

You can find many American Mastiff breeders online. But you have to do your homework before approaching them. Read their online reviews and ask for health guarantees.

Avoid buying from a breeder that’s located far away as you’ll want to visit the facility in person.

North American Mastiff puppies are just as adorable as those of any other canine, but you must inquire about their parents’ health before buying or adopting them. Avoid pet shops, backyard breeders, and sellers who don’t provide health guarantees.

The North American Mastiff price usually hovers around the $1,000 to $1,500 mark. You can fetch even lower rates if you take the adoption route.

A quick search for “North American Mastiff puppies for sale near me” will show numerous results. However, know that not all breeders you’ll come across will be legitimate. Unscrupulous breeders often ignore ethical breeding practices to produce pups with unique colors or unhealthy physical attributes.

If you notice a breeder advertising a certain color, size, or body type, it’s best to steer clear from them.

Is the North American Mastiff right for me?

The North American Mastiff is a massive canine that can be too much for novice dog owners. Unless you have prior experience handling and training a large pooch, we recommend that you pick another breed.

However, if you’re a seasoned pet parent who understands the needs of these giants, the North American Mastiff will make a loyal, obedient, and protective companion. 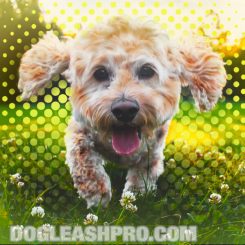 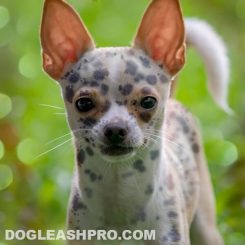 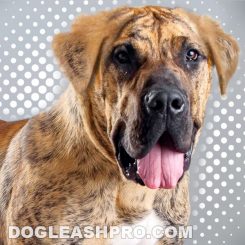