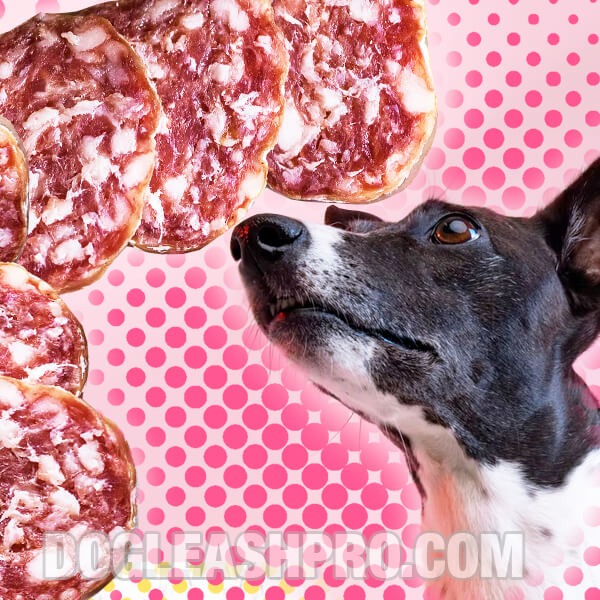 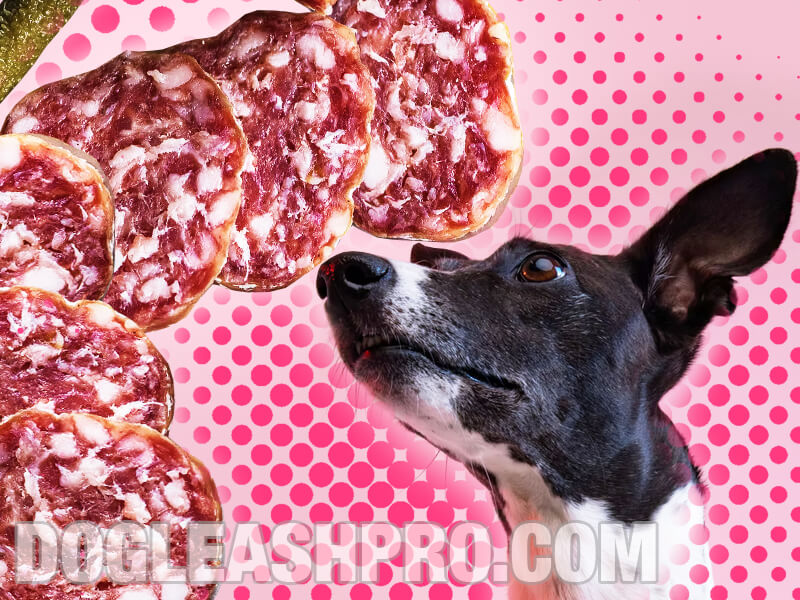 You’re probably munching on some Salami and your K9 friends are sitting there begging you for a bite or two with their puppy eyes. Before you give them a slice, you’ve probably wondered, “Can my dog eat Salami?”

Salami is cured sausage meat so it is just as salty as Pepperoni. Does this mean that Salami is bad for doggy consumption? Read on to learn everything you need to know about Salami and dogs. In the meantime, here’s the short answer to can dog eat Salami.

Can dogs eat Salami? No, dogs should not eat Salami. Although Salami is not toxic to dogs, it isn’t healthy for dogs since it is high in fat and sodium content. Eating too much Salami puts your dogs at risk for salt poisoning, weight gain, and other health issues. There may also be ingredients in Salami that are toxic to dogs such as garlic and onion.

Can dogs have Salami?

Ideally, dogs should not have Salami, however, if they steal a bite or two of Salami, they should be fine.

It’s important to note that owners should avoid feeding their pooch Salami on a regular basis. Doing so will affect your furry friend’s hydration level and weight.

That’s because Salami is a salty cured meat so it contains a lot of fat and sodium in it which can be dangerous to our furry pals if we’re not careful and allow them to overconsume Salami.

Is Salami bad for dogs?

Yes, some Salami can be bad for dogs, especially those that contain ingredients such as garlic or onion in any form.

Keep in mind that the following form of garlic and onion is toxic and dangerous to dogs:

Be careful if the Salami contains powered or dried garlic and onion because they are more concentrated so it is extremely dangerous to dogs.

If your furry friends consume too much Salami, they may be at risk for salt poisoning, weight gain, and onion and garlic poisoning. Your four-legged friends may experience the following symptoms:

If you notice your K9 friends showing any of the above symptoms, contact your dogs’ vet right away so that they may receive immediate medical attention and treatment.

Is Salami good for dogs?

No, Salami is not good for dogs. Salami actually means salted meat and it came from the Latin word, “Salumen.” Salami is a sausage that has been cured and is mixed with the following:

Additionally, the spices added to Salami are neither safe nor healthy for doggy consumption. Here’s why:

*If you have dogs with kidney failure or disease or have small dogs with sensitive stomachs, avoid feeding them food that contains vinegar. You can use vinegar around the house but don’t add it to your dog’s food.

**Stick with healthy and safe herbs for your pooch. For instance, ginger is great for your furry friend’s digestive system and health and it also contains anti-bacterial and anti-inflammatory properties.

So, is Salami ok for dogs?

As we can see, Salami is generally not ok for dogs. It’s always best to check the ingredients first before feeding your pooch Salami.

Since Salami is cured and processed, it is very salty, and too much salt consumption is bad for our dog’s health. Additionally, Salami usually contains ingredients that either do not sit well with your dog’s stomach or are toxic to them.

To err on the side of caution, it’s best not to give your four-legged friends Salami.

You’ve probably seen various types of Salami in your local grocery store. Some Salami is processed and cured differently than others and include various ingredients.

This means that some Salami is riskier for canine consumption than others. Below is a list of some of the most popular Salami we can find in our supermarket.

If you still have questions after this and find out how it can specifically affect your furry family member, we highly recommend that you contact your vet. Your dog’s vet knows your pooch the best and how certain types of Salami may affect him or her.

Yes, dogs can eat uncured Salami in moderation. That’s because the Salami isn’t cured so it isn’t as salty as cured Salami.

However, moderation is key so it’s best not to feed your pooch too much uncured Salami since it still contains tons of fat and too much fat consumption could lead to digestion problems, weight gain, heart issues, and more!

No matter the case, avoid allowing your pooch to eat too much of the hard Salami.

Keep in mind that hard Salami can also be referred to as dry Salami.

No, dogs should not eat Salami sticks. It’s very easy for our K9 pals to eat the whole Salami stick and this may cause several health problems in dogs. That’s because this puts them at risk for dehydration and salt poisoning.

For these reasons, keep Salami sticks out of your dog’s reach.

No, dogs should not eat Genoa Salami since it is made with pork meat, wine, and fat. This means that it is pretty greasy. Genoa Salami usually ages at room temperature without heat.

If your furbabies accidentally ate a small piece of Genoa Salami, they should be fine. However, do not purposely give them too much Genoa Salami since this could put them at risk of salt poisoning and dehydration.

Yes, dogs can eat Salami slices in moderation. In fact, the best way to feed your furry friends Salami is to give them Salami slices. This way, they are not eating too much Salami.

If you do feed your pooch Salami slices, make sure it’s a rare occasional treat. Avoid feeding him or her Salami slices daily or regularly.

Smaller dogs may be affected by the negative effects of Salami much quicker than bigger dogs. For this reason, be careful with how much Salami you’re feeding your small dogs.

No, puppies should not eat Salami. They are still growing and their digestive system may not be strong enough to handle too much salt intake. They may be at a higher risk for sodium toxicity and their body isn’t strong enough for Salami yet.

My dog ate Salami, what should I do?

If your dog ate Salami, don’t freak out right away. Find out how much Salami your dog ate and check the ingredients of the Salami that was consumed. If your pooch stole a bite or two, most likely he will be fine. However, you should still monitor him for the next 12 to 24 hours to make sure he is alright.

Contact your vet right away if your K9 friend ate a lot of Salami. He may be at risk of sodium, garlic, or onion poisoning and may need immediate medical attention.

Salami alternatives that are safe and dog-friendly

Instead of Salami, consider getting your furry family members canine-friendly dog treats like the ones below. My two dogs love these treats and would beg me for more with their cute puppy eyes. 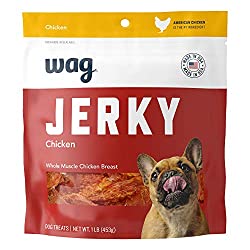 The Jerky Chicken is made proudly in the USA and is oven baked. It contains whole muscle chicken breast without any toxic ingredients or spices. The limited ingredient recipe ensures safety for your dogs. It doesn’t contain any artificial flavors or colors and is free from wheat, soy, corn, and grain.

Buy On Amazon
If you click this link and make a purchase, we earn a commission at no additional cost to you.
Soft and Chewy Dog Treats 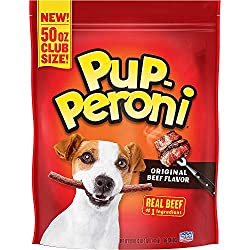 This real beef flavor dog snack is soft and chewy. It is flavorful and moist and will leave your dog wanting more!

So, can dogs eat Salami?

If you plan to give your furbabies Salami, check the ingredients first and be careful with how much Salami you’re giving them.

Dogs can enjoy Salami as a rare treat every now and then and should not eat it every day.

Salami is high in fat and sodium and both are harmful to your dog’s health. Too much Salami consumption can cause weight gain, obesity, and salt poisoning. Keep your vet posted on your dog’s behavior and progress after he has stolen more than a bite or two of the Salami. 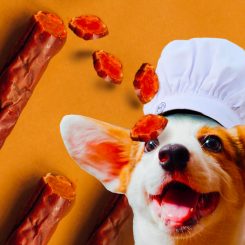 Can Dogs Eat Pepperoni? The Truth! 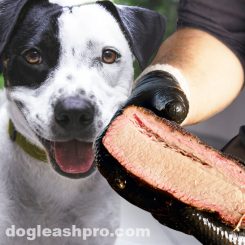 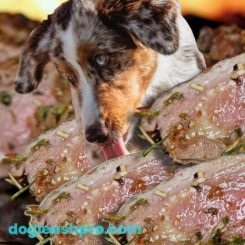