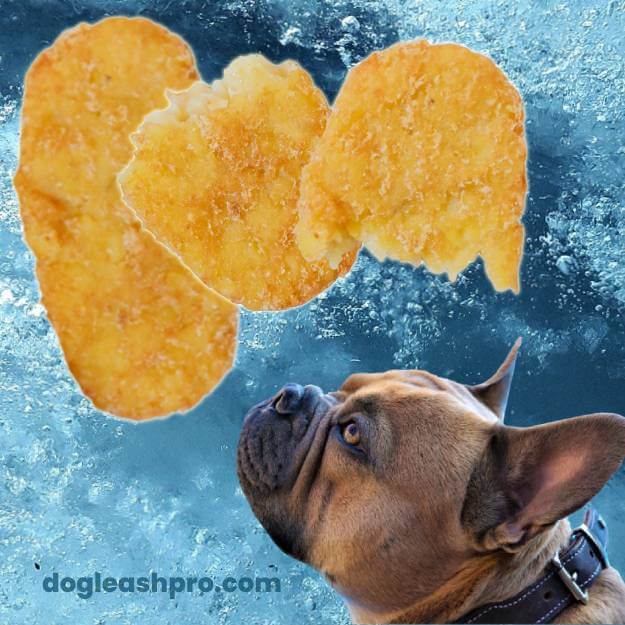 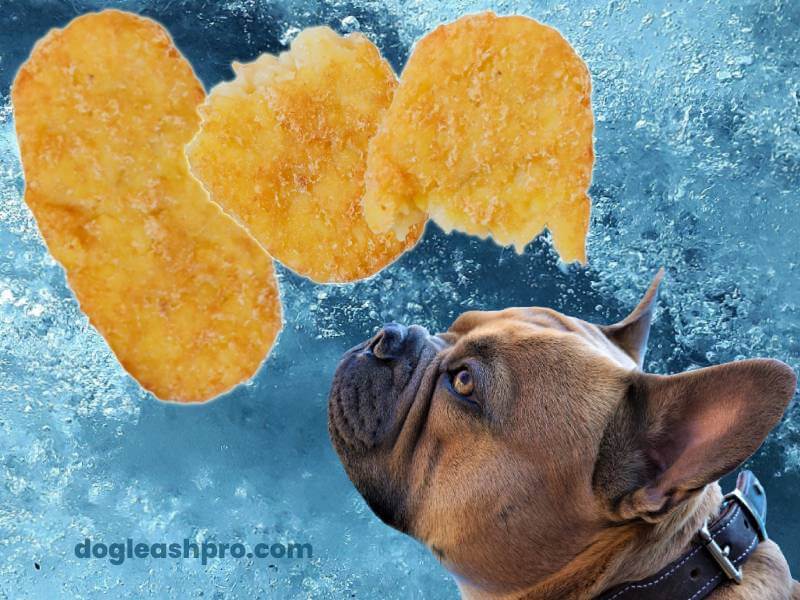 No, dogs should not eat Hash browns. Both the Mcdonald’s Hash Browns and Trader Joe’s Hash browns are fried in oils, which gives them their high-calorie count per serving and both Hash browns contain tons of salt, preservatives, and fats. In fact, depending on where you buy your Hash Browns, some also use onion as one of its ingredients.

Before you give Hash browns to your pups as treats, consider healthier options like Brussel sprouts or seeds.

Ok, let’s go ahead and discuss why Hash browns are not healthy for your canine companions, which ingredient in Hash browns could cause poisoning in dogs if consumed too much, and dog-friendly food alternatives to give your furry friends instead.

What is Hash Browns?

Hash browns are a classic staple American breakfast dish that was and still is very popular. In the 1890s, they first appeared on breakfast menus in the city that never sleeps, New York City.

Since then Hash browns, like Fortune cookies, have been commercialized. For instance, in the early 1980s, Hash browns were commercialized by large fast-food corporations such as Burger King and McDonald’s. Now, Hash browns can be found throughout the United States.

Usually fried or grilled, some areas of the United States include chopped or diced onions in Hash browns. Today, Hash browns are served throughout the day and not just for breakfast.

Due to its popularity, Hash browns are also now mass-produced and are sold at your local grocery stores or supermarkets. They usually come in frozen, dehydrated, and refrigerated forms.

What is in Hash Browns?

You may be interested in: Can Dogs Eat Funyuns?

Let’s also go over the ingredients in the Hash browns:

Plain potatoes are safe for dogs, fried potatoes with added salt are harmful to dogs)

When it comes to potatoes, make sure the potatoes are fully cooked or baked. The raw potatoes should never be fed to dogs and it contains a toxic compound called solanine that is dangerous to our canines. So be careful and do not let your raw potato fall onto the floor if you are making homemade Hash browns.

Plain potatoes are best for dogs. When they are fried in oil with added salt, that’s when they are no longer healthy and safe for dogs to eat.

Since both the McDonald’s Hash brown and Trader Joe’s Hash brown contain a high amount of salt in the potatoes (as you’ll find out below), you should not feed your canine friends these Hash browns.

Vegetable oils used in Hash Browns are harmful to dogs

You should keep the Hash browns away from dogs because potatoes fried in oil are not healthy for our furry friends.

We highly recommend the following oils as they are safe and canine-friendly:

The vegetable oils listed above do not sit well with the dog’s digestive system and they contain trans fat and saturated fat, both of which are the bad type of fats. Like many of you, when I pick up Hash browns from McDonald’s, they are very oily and I would not want my dogs to eat that.

“Vegetable oil, grease, butter, and bacon fat are not appropriate fats for your dog to be ingesting. These low-grade oils may do more damage to your pet’s health than good, potentially causing disorders like pancreatitis or obesity.”

Excessive amount of salt in Hash Browns is harmful to dogs

Eating even a little bit of Hash browns could cause salt toxicity in dogs. Salt is what makes Hash brown tasty. Avoid feeding your pups any Hash brown.

Hint: It is best if dogs avoid any human food with lots of added salt such as Egg salad or other dairy products because it can cause salt toxicity in dogs.

Dextrose is one of the main ingredients in Hash Browns. It is usually corn sugar or sweetener. Whether the ingredient is dextrose, corn sugar, or sweetener, they are all simply just sugar.

Our furry friends don’t require sugar in their diet at all. In fact, their body naturally converts the carbohydrates from their regular food to sugar so there’s no need to consume any sugar.

When dogs consume too much sugar, they are at risk of weight gain, dental issues, diabetes, and even pancreatitis. This is why it’s best to keep human food that contains any form of sugar away from our furry friends.

Be careful with sweeteners as well. Sweeteners like xylitol are dangerous and toxic to dogs.

Black pepper is safe for dogs in moderation

Black pepper is safe for dogs if consumed in small amounts and in moderation. If your dog accidentally consumes food with large amounts of pepper, it can cause the following:

The ingredients listed above from both the McDonald’s Hash browns and Trader Joe’s Hash Browns need to be put into context, specifically how it would affect a dog’s health if he were to eat Hash browns.

Are Hash browns bad for dogs?

From the nutritional profile above, here’s why Hash browns are terrible for our dogs:

As you can see, Hash Browns are high in calorie count. Note that dogs only need about 25 calories per pound every day.

Additionally, with the 90/10 rule, treats should only account for 10% of a dog’s total daily diet.

Both of these percentages are already over the 10% rule for daily dog treats consumption.

So if you have a small dog, even a few bites of the Hash browns could tip over their daily calorie count that day. This is dangerous as it could lead to weight gain and canine obesity if dogs eat Hash browns regularly.

Hint: Many people drizzle melted cheddar cheese or cheese sauce on top of the Hash browns. While this is fine for human consumption, it’s best to avoid feeding your pup Hash browns drizzle in dairy or cheese products because many dogs are lactose-intolerant.

Symptoms of salt toxicity in dogs include:

It’s best to avoid excess salt intake in dogs. If your dog has salt poisoning, contact your vet immediately and bring him in to see the vet.

Hash browns, no matter if it is from a fast food restaurant like McDonald’s or from the grocery store like Trader Joe’s are high in fat. Avoid feeding your pups any Hash browns, but if you must, give them only a tiny amount and do not do this regularly as it could lead to canine obesity.

As you can see from the nutritional profile of both the McDonald’s Hash Browns and Trader Joe’s Hash Browns, the Hash browns are high in carbohydrates. Too many carbs are bad for dogs as they could lead to canine obesity and diabetes.

Dogs should get their carbs from their regular high-quality dog food. Avoid giving Hash browns to your pups as it is high in carbohydrates.

Lack of nutrient benefits for dogs

Looking at the McDonald’s Hash brown nutritional profile, you can see that it doesn’t provide any nutrients to dogs so your four-legged friends are just eating empty calories.

If your pup accidentially ate a lot of Hash brown and you notice the following symptoms or behavioral change, contact or visit your veterinarian right away.

If I’m eating Hash browns, whether they are from McDonald’s or Trader Joe’s, I refuse to give them to my pups as the cooking method and ingredients in these Hash browns are not safe and healthy for dogs.

Instead, I provide them with the following healthy dog treats: 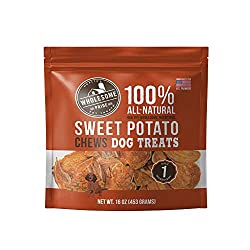 This fruit and vegetable dog treat is 100% all-natural and the sweet potato chew is vegan, grain-free, and gluten-free.

Buy On Amazon
If you click this link and make a purchase, we earn a commission at no additional cost to you.
Healthy Dog Treats 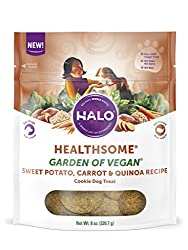 The vegan, grain-free, and low-calorie crunchy dog treat has three flavors in one bag: sweet potato, carrot, and quinoa. It is sustainably sourced and made in the USA.

Buy On Amazon
If you click this link and make a purchase, we earn a commission at no additional cost to you.
Superfood Dog Treats 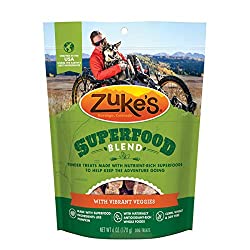 The superfood blend natural dog treats come in several flavors including veggies, greens, and berries. Crated in the USA, this dog treat is gluten-free and rich in antioxidants.

So, can dogs eat Hash browns?

As dog owners, it can be very tempting to give our table food to our furry friends, especially when they are looking at you with their puppy dog eyes. However many of our human foods are not meant for canine consumption. Hash brown is one of them, no matter if you buy it from McDonald’s, Subway, or at a grocery store like Trader Joe’s.

We recommend that you avoid giving your pups Hash browns. If you do happen to give your pup Hash browns, make sure it is not on a regular basis and you’re only giving him a very small amount. Also, the Hash browns should not contain ingredients like onions as it can be toxic to dogs.

It’s important to keep the 90/10 rule in mind before you feed your furry friends dog treats and snacks.

No, dogs should not eat frozen Hash browns. Frozen Hash browns still contain high levels of salt, preservatives, and fats. All of these are harmful to a dog’s health and digestive system.

Is Hash Brown bad for dogs?

Yes, Hash brown is bad for dogs. Dog owners should not feed their pooch Hash browns because they are oily and contain fats, salt, and preservatives. Hash browns have a high calorie count and it’s easy for dogs to accidentally eat the whole Hash brown.

If your furry friends love potatoes, you can feed them potatoes in moderation. Be sure it is plain with no added flavor and definitely make sure it is not fried in oil.

Can dogs eat hash browns from Chick Fil A?

Dogs should not eat Hash browns from Chick-fil-a. In general, it is not healthy for dogs to eat any fried food. Hash brown is fried in vegetable oil and includes tons of ingredients that will not sit well with your dog’s tummy. There is also added salt, which your pups do not need.

Most of the ingredients in Hash browns from Chick-fil-a are not healthy or safe for dogs. Additionally, the Hash brown does not provide any nutritional benefit or value to your pooch. For these reasons, we recommend that you do not feed your canine friends Hash browns, whether from Chick-fil-a or other fast food restaurant. 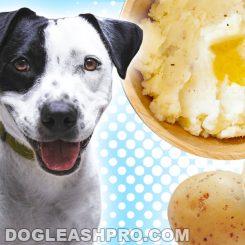 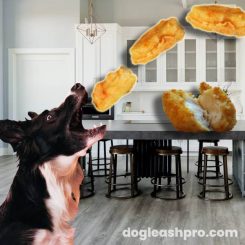 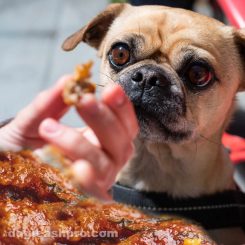