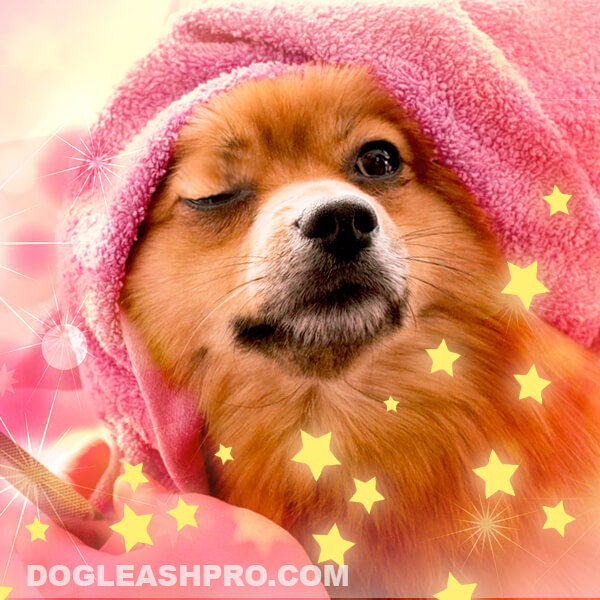 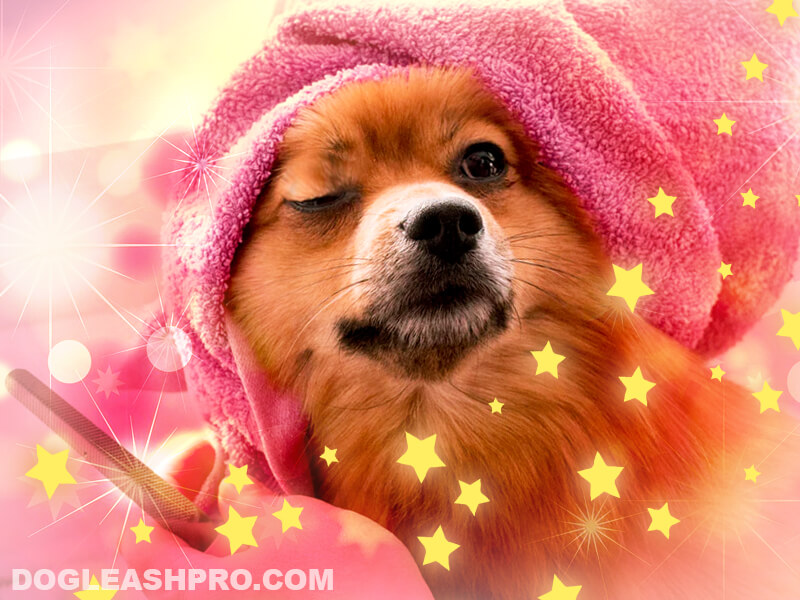 Yesterday, I thought my dog was sleeping with her eyes open so I tried to clean around her bed quietly. But then she got up, tried to get my attention, and wanted me to pet her. When I did, she looked straight at me and started winking. Do dogs actually wink and why do they wink? Here’s the short answer first.

Why do dogs wink? Dogs wink for many reasons including letting their owners know how happy they are, that they are submissive, or simply copying their owners’ behavior. While all of this sounds lovely and adorable, there are situations where excessive winking could indicate an eye issue and need your vet’s attention.

At that moment, I wondered what she was trying to tell me. Have you noticed this behavior from your dog as well? My Chihuahua winks occasionally, but for dogs that wink too much, could it be a health issue? In this comprehensive guide, we’ll answer all your questions regarding dogs winking and why do dogs wink.

Why Do Dogs Wink?

That is just a brief answer and there’s more to why dogs wink. Below, we’ll discuss in detail why do dogs wink at you, what it means when dogs wink with one eye, and whether it’s normal for dogs to wink excessively or should you be concerned. Alright, let’s go to it!

Why does my dog wink at me?

Unlike humans, our furry friends do not use facial expressions to communicate with us. However, since dogs have been domesticated for generations and have lived with humans for thousands of years, they have learned several ways to communicate with us in order to show us love and affection in exchange for that food and treats! One of those ways is by winking at us.

What does it mean when a dog winks at you?

Here’s why dogs wink at us and what it mean.

1. Dogs wink because they are showing submission

If you walk your dogs, you’ll notice your pooch making eye contact with other dogs as a way to show aggression and dominance, or simply to show who’s boss.

If both dogs keep making eye contact with each other, that aggression will build until one of the dogs starts launching forward to show dominance. This is why many dog owners will gently pull their dog’s leash to distract and disrupt any intense staring match.

Fun Fact: While Chihuahuas are small dogs, they are not afraid to show their dominance and will bite if they have to. You can read more about Chihuahua Bite Force PSI and see if their bite force is as strong as you think.

On the contrary, dogs generally do not want to attack when they stare at their owners. Instead, when you stare at your four-legged friends and they stare back at you, you’ll notice that they will do one of two things:

A dog’s wink when they stare at you is usually very subtle and the wink is a submissive behavior in this case. When dogs stare at you and subtly wink, they accept you as the dominant one of the pack and are telling you that they are submissive to you.

It would be kind of weird if dogs intentionally have a staring contest with us so they will wink to stop the staring and that they give the dominant power over to us.

2. Dogs wink to show that they are happy

If you’re hugging, petting, or kissing your furry family members, they may start winking at you in addition to wagging their tails. Every time I massage my Chihuahua’s head, ears, or under her chin, she would tilt her head back at me and give me a wink or two or three!

Not only is my dog showing submission, but she enjoys the petting and bonding time together.

I also noticed that the happier my dog is, the more she will wink at me.

3. Dogs wink because they are imitating the dog owners

If you wink at your dogs while petting or cuddling with them, they may imitate what you’re doing and wink back. Our dogs are very smart so they will learn to adapt accordingly. The more the dogs stay around with their owners, the more they start to mimic the behaviors of their owners such as the following:

Going back to winking, if you tend to wink a lot when you’re staring at your dogs, they may learn this winking behavior from you and wink back at you.

Since I have two dogs, a Labrador and a Chihuahua, my Chihuahua (the younger dog) tend to follow whatever my Labrador (older dog) is doing. As you can see, imitation is pretty common in multi-dog households.

When the second dog arrives at the new house, he or she will observe and imitate the first dog’s behavior. This is very common and normal. The new dog will learn how to behave properly in the house through imitation from the first dog. It’s almost like the new dog looks up to the first dog as a role model.

Why do dogs wink at you?

The three reasons above are just a few reasons why your dogs wink at you. Unlike humans who use voice commands, facial expressions, and hand movements to communicate and get our points across, our canine buddies can’t do any of that.

Our K9 pals communicate with us using physical gestures instead such as pawing your legs because they want to be held or scratching the front door rug to tell you that they want to head outside for a walk, or laying on your legs and showing their belly because they enjoy the rubs and want more.

If you’re like me, I try to spend as much time as I can with my two pups. From spending enough time with them, I also start to learn their form of communication and can guess what they are trying to say to me.

Dogs don’t really have facial expressions but their eyes and the muscle around their eyes can sometimes manipulate you into giving them food and treats. Do you know what I’m talking about? If you fall for this, you probably know what I’m referring to. It’s their “puppy dog eyes.”

Handy Hint: There’s some food that humans should never share with their dogs, but you’ve probably seen videos of happy dogs wagging their tails when they are licking Puppuccino, but can dogs eat whipped cream? Find out!

Why do dogs wink with one eye?

There is a difference between dogs winking and dogs blinking. It’s normal for dogs to wink with one eye, which is what winking is. One eye is a wink and two eyes is a blink.

Dogs wink with one eye to show you that they are happy, or are submissive, or trying to imitate you.

Why do dogs wink at humans?

Dogs wink at humans to show submission, that they are happy, or that they are imitating their owner’s behavior through years of living together.

Dogs that are very sociable will have a tendency to wink at humans to show their submission or that they are happy to be petted by strangers.

Why do dogs wink so much?

If your dogs wink excessively, they may have a medical condition in which one of the eyelids is causing irritation because it is flip inward towards the eyeballs. This is a health condition called entropion and it’s often a genetic condition.

If you suspect your pooch has entropion, be sure to contact your vet right away. This is a serious health condition that needs to be taken care of immediately as it is very painful for your canine friends.

Not treating this condition for a prolonged period of time can cause blindness in dogs or even ulcerated corneas.

Be sure to consult with your vet if you notice your dog frequently crying and winking excessively.

Should you train your dogs to wink?

Dogs winking should be natural and not taught through training or by force. Dogs weren’t born to wink and it’s only learned and imitated when they pick it up from their owners’ behavior.

While humans think it is entertaining and cool for our dogs to wink at us, it is rightfully so if the dog does it naturally on their own.

There are articles discussing how to train your dogs to wink more often and on command by using a technique called behavioral shaping training which we don’t recommend.

While dogs love to please their owners, there are other natural ways they show their happiness and gratitude such as by licking the owner as a way to say thank you.

Using positive behavior shaping training to teach your dogs how to behave properly indoors is fine, but we do not recommend training or forcing our dogs to wink.

So, Why Do Dogs Wink?

Our dogs wink for several reasons as stated in this guide so the next time they wink at you, you’ll have an idea of what it means and what they are trying to tell you. Dogs are one of our most loyal and loving companions and they will do anything to please us including winking at us.

While many enjoy seeing their dogs wink, the dog’s winking should be natural and not forced. While it may seem cute, forcing our dogs to wink is not recommended.

If your dogs spend many years with you, then they may pick up some of your behaviors such as winking. 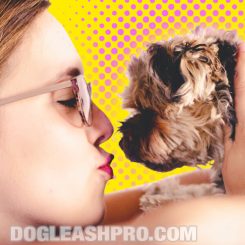 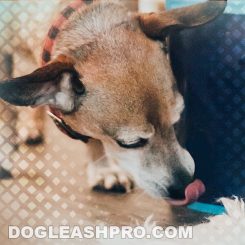 Why Is My Dog Licking The Floor? 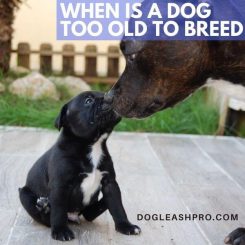 When Is A Dog Too Old To Breed?

Leash Training: How to Train Your Dog to Walk on a Leash →
Affiliate Disclosure:
As an Amazon Associate we earn from qualifying purchases.
1 Shares
Pin1
Tweet
Share
Flip
Share